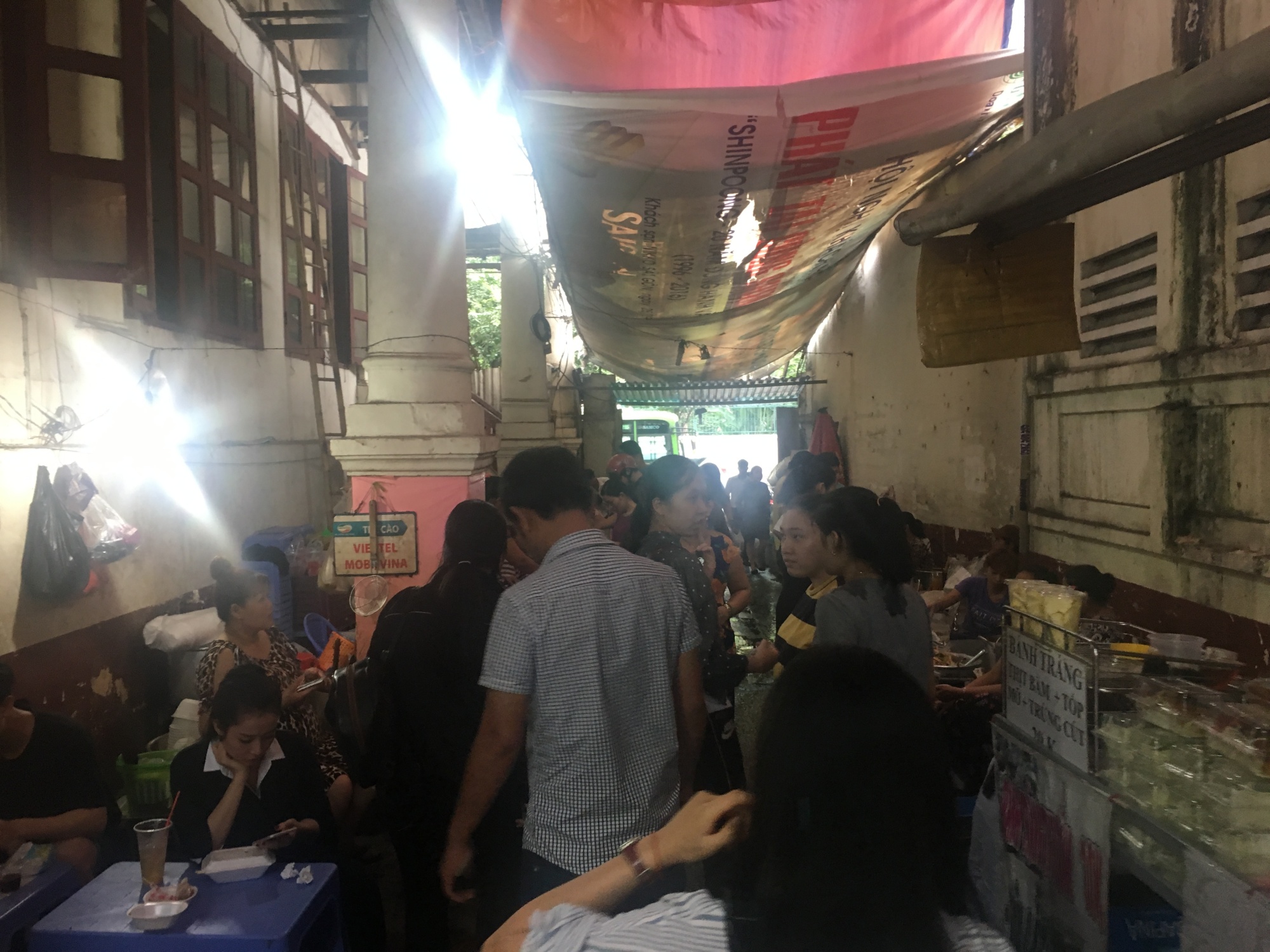 We woke up at 6:00a to leave for the airport and stopped for breakfast pho on the way. Pho is not really an on-the-go food, by the way. We flew out of the same airport in Hanoi where I first landed almost three weeks ago and it took about two hours to get to Ho Chi Minh City, the former Saigon. Trang’s uncle, her mom’s brother, picked us up at the airport and took us back to the hotel he owns where we will be staying for the next four nights.

Ho Chi Minh City has a different feel than Hanoi, though it’s hard to articulate. It’s more westernized and the buildings are formatted in a way more familiar to me. But it isn’t like any big city I’ve visited in the U.S. Cars are much bigger here than in Hanoi (bigger as in some smaller SUVs and trucks) and there are just as many motorbikes, but less mind-boggling traffic. It’s quieter but still bustling. The people we drive by are younger and there are a lot more foreigners here. Trang says the people have a nicer and more open-minded reputation here. I was surprised to see a calendar with an image of Jesus and Mary hanging in a restaurant, but Trang said that religion is more prevalent here, coupled with progressiveness. What a concept!

We had lunch with Trang’s uncle and aunt, who live on the seventh and eighth floor of their hotel with a beautiful skyline view of the city. Her uncle also owns three shrimp farms and so of course we had shrimp with our meal. After a quick nap, a girl from Ho Chi Minh City who Trang roomed with during the Johnson scholarship competition weekend at Washington and Lee (the same weekend I met Trang) picked us up in a cab and took us around the city. We went to an alleyway known for the best street food. The smell was indescribable (in a good way). Platters and small tables and plates and pots full of every kind of fresh food imaginable (and some unimaginable) cooking right in front of you, and all you have to do is point to it and it’s yours. I had pork with vermicelli and passionfruit juice.

The only thing I didn’t want to try was chicken feet, because I’ve had them before and I just can’t do it. After we ate, we took another cab to a small teahouse tucked away in an abandoned apartment, which our friend said was a recent trend here. I picked out rose tango tea (delicious!) for us and I also had some sort of pudding. Hot tea here is also collective: you pick your flavor and the restaurant or teahouse brings it out to you in a teapot over a tea candle with a tiny pitcher of milk, sugar cubes and enough teacups for everyone with you. It’s usually really cute, but sometimes I wish I bring hot tea to-go with me in my own cup. Also, what if I were with an indecisive person who I couldn’t agree with on a tea flavor? I would love to find a nice tea set while I’m here to bring back with me for my apartment this year. Contrary to popular belief, you CAN have tea parties in college! I made tea for friends that would come over to my dorm room all the time. This is just a much fancier presentation.